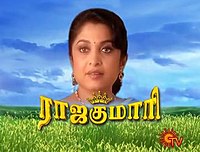 Rajakumari ( Rajakumari}}) is a 2013 Indian Tamil-language soap opera that aired on Sun TV from 28 January 2013 to 7 June 2013 for 94 episodes. The show premiered on Monday January 2013. It aired Monday through Friday at 8:30pm IST. The show starring by Ramya Krishnan, Sarath Babu, Geetha, Nalini and Menaka.

Nilampari (Ramya Krishnan) wants to lead a simple and peaceful life. But people around her have different motives. This causes many problems to her, and she faces them with her positive energy and support from a few faithful friends and relatives.