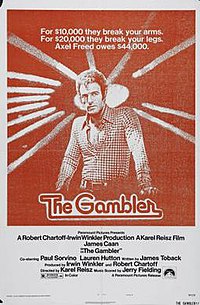 The Gambler is a 1974 American crime drama film written by James Toback and directed by Karel Reisz. It stars James Caan, Paul Sorvino and Lauren Hutton.

Axel Freed is a Harvard University–educated English professor with a gambling addiction that begins to spiral out of control. In the classroom, Freed inspires his college students with his interpretations of Fyodor Dostoevsky's work. In his personal life, Axel has the affection of the beautiful Billie and the admiration of his family, including his mother, Naomi, who is a doctor, and his grandfather, a wealthy businessman.