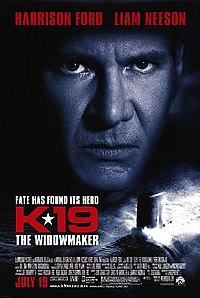 K-19: The Widowmaker is a 2002 historical submarine film directed and produced by Kathryn Bigelow, and produced by Edward S. Feldman, Sigurjon Sighvatsson, Christine Whitaker and Matthias Deyle with screenplay by Christopher Kyle. An international production of the US, UK, Germany and Canada, the film takes place in 1961 and focuses its story on the Soviet K-19 submarine.

In 1961, the Soviet Union launches its first ballistic missile nuclear submarine, the ''K-19'', commanded by Captain Alexei Vostrikov (Harrison Ford), with executive officer Mikhail Polenin (Liam Neeson), the crew's original captain. Vostrikov is alleged to have been appointed through his wife's political connections, as well as Polenin's tendency to put crew morale and safety before Soviet pride. Discovering the reactor officer drunk and asleep on duty, Vostrikov fires him, receiving a replacement, Vadim Radtchenko (Peter Sarsgaard), fresh from the academy. Bad luck surrounds the launch; the medical officer is killed by a truck and replaced by command's foremost medical officer, who has never been out to sea, and the inaugural bottle of champagne fails to break on the bow.