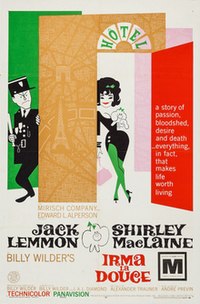 Irma la Douce (, "Irma the Sweet") is a 1963 American romantic comedy film starring Jack Lemmon and Shirley MacLaine, directed by Billy Wilder. It is based on the 1956 French stage musical Irma La Douce by Marguerite Monnot and Alexandre Breffort.

Irma la Douce tells the story of Nestor Patou (Jack Lemmon), an honest cop, who after being transferred from the park Bois de Boulogne to a more urban neighborhood in Paris, finds a street full of prostitutes working at the Hotel Casanova and proceeds to raid the place. The police inspector, who is Nestor's superior, and the other policemen, have been aware of the prostitution, but tolerate it in exchange for bribes. The inspector, a client of the prostitutes himself, fires Nestor, who is accidentally framed for bribery.