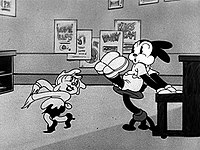 Five and Dime is a 1933 cartoon short by Walter Lantz Productions, and stars Oswald the Lucky Rabbit. It is the 74th Oswald short produced by Lantz and the 125th overall.

Oswald is dancing on an urban street until it suddenly rains. He then runs into a five and dime store. Because his shorts are quite saturated, Oswald grabs a wringer and heads somewhere within the store to dry it. The place he goes to, however, turns out to be the shop's display window where the outside crowd see him and laugh. When he returns to the main part of the shop, Oswald befriends the store clerk whose appearance resembles the girl beagle. The clerk asks Oswald if he could play the piano. Oswald insists as he plays the instrument and sings the song "I Found a Million Dollar Baby (in a Five and Ten Cent Store)", thus getting attention from the store patrons.