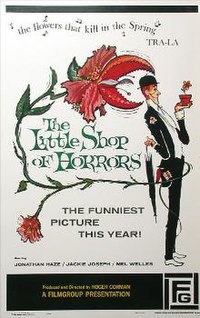 The Little Shop of Horrors 1960

The Little Shop of Horrors is a 1960 American horror comedy film directed by Roger Corman. Written by Charles B. Griffith, the film is a farce about an inadequate florist's assistant who cultivates a plant that feeds on human blood. The film's concept is thought to be based on "Green Thoughts," a 1932 story by John Collier about a man-eating plant. Dennis McDougal suggests that Griffith may have been influenced by Arthur C. Clarke's 1956 sci-fi short story "The Reluctant Orchid" (which was in turn inspired by the 1905 H. G. Wells story "The Flowering of the Strange Orchid").

Penny-pinching Gravis Mushnick owns a florist shop staffed by himself and two employees, the sweet Audrey Fulquard and the clumsy Seymour Krelboined. Located on skid row, the rundown shop gets little business. When Seymour fouls up a floral arrangement for sadistic dentist Dr. Farb, Mushnick fires him; hoping to change his mind, Seymour tells him about a special plant he has grown from seeds he got from a "Japanese gardener over on Central Avenue." Seymour admits that he named the plant "Audrey Jr.", which delights the real Audrey.