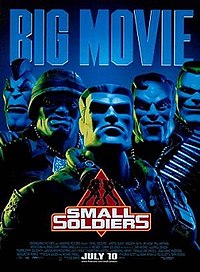 Small Soldiers is a 1998 American science fiction film directed by Joe Dante from a screenplay by Ted Elliott. It stars Kirsten Dunst and Gregory Smith, along with the voices of Frank Langella and Tommy Lee Jones. The film depicts two conflicting factions of action figures who turn sentient after being programmed with a military microprocessor, putting lives in danger when one faction turns violent in their efforts to eliminate their enemy toys and anyone assisting them.