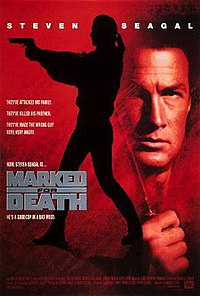 Marked for Death is a 1990 American action film directed by Dwight H. Little. The film stars Steven Seagal as John Hatcher, a former DEA troubleshooter who returns to his Illinois hometown only to find it taken over by a gang of vicious Jamaican drug dealers led by Screwface using a combination of fear and Obeah, a Jamaican syncretic religion of West African and Caribbean origin similar to Haitian vodou and Santería as practiced in Jamaica.

Chicago DEA agent John Hatcher returns from Colombia, where drug dealers killed his partner Chico. As a result of Chico's death and years of dead end work, John retires and heads to his family's home town of Lincoln Heights in suburban Chicago. He visits the local school to meet his old friend and former U.S. Army buddy Max Keller who works there as a football coach and physical education teacher.