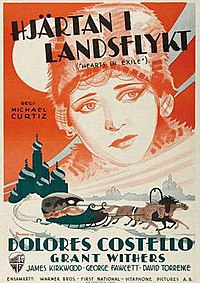 Hearts in Exile is a 1929 American pre-Code romance film produced and distributed by Warner Bros. and directed by Michael Curtiz. It was also released in a silent version with music and effects. It starred Dolores Costello in a story based on the 1904 novel by John Oxenham. An earlier 1915 film starring Clara Kimball Young was also produced, and is extant, but the 1929 version is considered to be a lost film.