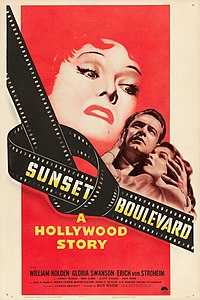 Sunset Boulevard (styled in the main title on screen as SUNSET BLVD.) is a 1950 American film noir directed and co-written by Billy Wilder, and produced and co-written by Charles Brackett. It was named after the thoroughfare with the same name that runs through Los Angeles and Beverly Hills, California.

At a mansion on Sunset Boulevard, the body of Joe Gillis floats in the swimming pool. In a flashback, Joe relates the events leading to his death.