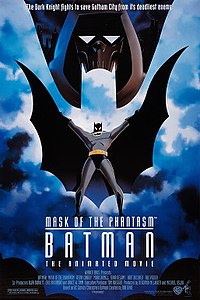 Batman: Mask of the Phantasm is a 1993 American animated superhero film featuring the DC Comics character Batman. Directed by Eric Radomski and Bruce Timm, it is a cinematic stand-alone continuation of Batman: The Animated Series and the first original theatrical film produced by Warner Bros. Animation.

A young Bruce Wayne meets Andrea Beaumont while visiting his parents' grave, and they form a deep mutual attraction. That night, in one of his first crime-fighting attempts, Bruce foils an armored car robbery, but is discouraged because the criminals did not fear him. Bruce proposes marriage to Andrea, who accepts. However, Andrea mysteriously leaves Gotham with her father, businessman Carl Beaumont, ending her engagement in a Dear John letter. Heartbroken, Bruce becomes Batman over the course of ten years.