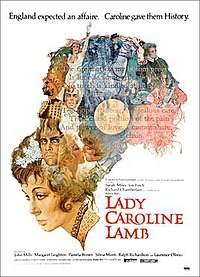 Caroline Ponsonby (Sarah Miles) accepts a marriage proposal from William Lamb (Jon Finch). Despite the misgivings of his mother, the marriage seems happy enough at first, a love match, but on their honeymoon in Italy William becomes concerned about Lady Caroline's wilful behaviour, which leads to a man's death. Back in England William is seen as a political "coming man", respected by parliamentarians both Whig and Tory. Meanwhile Lady Caroline meets the poverty stricken Lord Byron (Richard Chamberlain), and visits his modest flat. To her husband, she claims to find Byron "disturbing" and that she will not see him again. Byron has a sudden success with his long poem, Childe Harold's Pilgrimage, and becomes a wealthy celebrity, feted in society. An early literary superstar, he also becomes an object of fascination among women, some of whom write to him provocative fan letters. Lady Caroline and Byron begin a scandalous affair. Eventually he tires of her, and after she appears with Byron at a Holland House costume ball as a black slave, half naked and covered in greasepaint, she finds herself humiliated and a figure of derision in society. At the ball, Byron becomes interested in another woman, his future wife, Anne Isabella Millbanke (Silvia Monti). Lady Caroline's behaviour becomes more bizarre when, dressed as a coach boy, she stalks Byron to a ceremonial dinner commemorating Wellington's victory against the French. Crashing the gathering, she interrupts Byron and Millbanke, cutting her forearm with a knife. William is taken to meet King George IV, who pressures him to leave Lady Caroline so he can take up the prestigious post of Chief Secretary for Ireland, but William is reluctant to abandon her. Lady Caroline's mental health has deteriorated further but, with the support of her husband, she appears to recover. However, after she understands that her notoriety is undermining her husband's career, her wilfulness returns. She flees to France, where she has a brief affair with Wellington. Spurned by him, she returns to England and prepares a legal separation, with the approval of William's mother. Lady Caroline descends further into despair and illness, dying apparently from a broken heart.