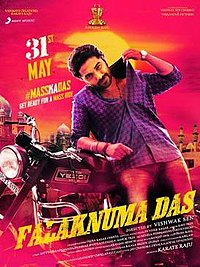 Falaknuma Das is a 2019 Indian Telugu-language action thriller film released on 31 May 2019 written and directed by Vishwak Sen. This movie is an official remake of Malayalam movie Angamaly Diaries.

This is a story about the undesirable outcome that awaits a man with uncontrollable aggression. Das (Vishwak Sen) is a young man from Falaknuma who lives with his mother and sister. He forms a gang with his childhood friends and their role models are Shankar Anna and Peg Pandu (Uttej). As they grow up, they grew fond of them looking up to them as their mentors. Meanwhile, Das and Tina, who is his childhood friend, get into a relationship. One day, Shankar Anna gets murdered by two gangsters named Ravi and Raju and they go to jail for that and it devastates Das.