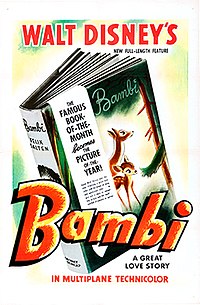 Bambi is a 1942 American animated drama film directed by David Hand (supervising a team of sequence directors), produced by Walt Disney and based on the 1923 book Bambi, a Life in the Woods by Austrian author and hunter Felix Salten. The film was released by RKO Radio Pictures on August 13, 1942, and is the fifth Disney animated feature film.

A doe gives birth to a fawn named Bambi, who will one day take over the position of Great Prince of the Forest, a title currently held by Bambi's father, who guards the woodland creatures against the dangers of hunters. The fawn is quickly befriended by an eager, energetic rabbit named Thumper, who helps to teach him to walk and speak. Bambi grows up very attached to his mother, with whom he spends most of his time. He soon makes other friends, including a young skunk he mistakenly calls "Flower" (who is so flattered, he keeps the name) and a female fawn named Faline. Curious and inquisitive, Bambi frequently asks about the world around him and is cautioned about the dangers of life as a forest creature by his loving mother. One day out in a meadow, Bambi briefly sees The Great Prince but does not realize that he is his father. As the Great Prince wanders uphill, he discovers the human hunter, named "Man" by all the animals, is coming and rushes down to the meadow to get everyone to safety. Bambi is briefly separated from his mother during that time but is escorted to her by the Great Prince as the three of them make it back in the forest just as Man fires his gun.