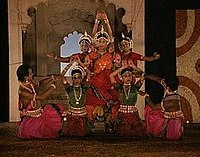 Jag Mandir, sometimes known by its subtitle, The Eccentric Private Theatre of the Maharaja of Udaipur, is a 1991 documentary film directed for television by Werner Herzog. The bulk of the film consists of footage of an elaborate theatrical performance for the Maharaj Arvind Singh Mewar at the City Palace of Udaipur, Rajasthan staged by André Heller.