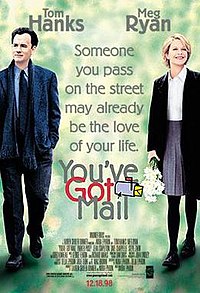 You've Got Mail is a 1998 American romantic comedy film directed by Nora Ephron and starring Tom Hanks and Meg Ryan. Inspired by the 1937 Hungarian play Parfumerie by Miklós László (which had earlier been adapted in 1940 as The Shop Around the Corner and in 1949 as In the Good Old Summertime), it was co-written by Nora and Delia Ephron. It tells the story of two people in an online romance who are unaware they are also business rivals. It marked the third pairing of Hanks and Ryan, who previously appeared together in Joe Versus the Volcano (1990) and Sleepless in Seattle (1993) the latter of which was directed by Ephron.

Kathleen Kelly is in a relationship with Frank Navasky, a left-leaning newspaper writer for The New York Observer who is always in search of an opportunity to root for the underdog. While Frank is devoted to his typewriter, Kathleen prefers her laptop and logging into her AOL email account. Using the screen name "Shopgirl", she reads an email from "NY152", the screen name of Joe Fox, whom she first met in an "over-30s" chatroom. As her voice narrates her reading of the email, she reveals the boundaries of the online relationship: no specifics, including no names, career or class information, or family connections.