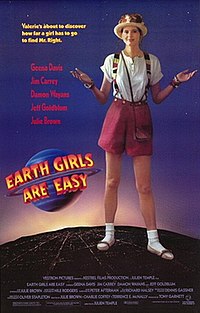 Earth Girls Are Easy is a 1988 American musical romantic comedy science fiction film that was produced by Tony Garnett, Duncan Henderson, and Terrence E. McNally and was directed by Julien Temple. The film stars Geena Davis, Julie Brown, Jeff Goldblum, Damon Wayans and Jim Carrey. The plot is based on the song "Earth Girls Are Easy" from Julie Brown's 1984 mini-album Goddess in Progress.

Three furry aliens—the blue Mac, the yellow Zeebo, and the red Wiploc—are traveling in a space ship. It has been a long time since they have had female companionship, and they receive a broadcast showing human females. They are titillated by these "hairless", shapely creatures, and when they discover that the broadcast came from Earth, they set off and land in Southern California.