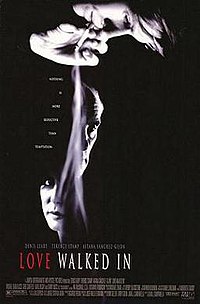 Love Walked In is a 1997 Argentine-American neo-noir drama/thriller film co-written and directed by Juan José Campanella and starring Denis Leary, Terence Stamp and Aitana Sánchez-Gijón. It was based on the novel Ni el tiro del final ("Not Even The Final Shot") by Argentine writer José Pablo Feinmann. The film takes its title from George Gershwin's song "Love Walked In".

Jack (Denis Leary) is a world-weary pianist and writer in a lounge named the Blue Cat. His wife, Vicki (Aitana Sánchez-Gijón), is a songstress who has a way with the "pseudo-Gershwin" tunes her husband writes. The couple is desperately poor after 10 years of touring crummy clubs.