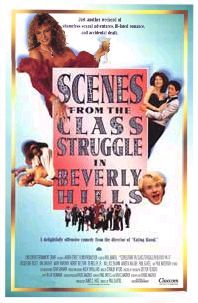 Scenes from the Class Struggle in Beverly Hills 1989

Recently widowed Clare, a former television sitcom star, invites her next-door neighbor Lisabeth to stay with her while Lisabeth's house is fumigated. Lisabeth's brother Peter, a playwright, arrives with his new bride To-Bel, an African-American woman. To-Bel had a fling in Hawaii with Howard, Lisabeth's ex-husband, who shows up unexpectedly and begs Lisabeth to take him back. (To-Bel who had no idea she slept with Lisabeth's ex-husband before marrying her brother describes the coincidence as "a freaky little act of God.")