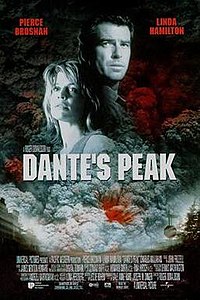 Dante's Peak is a 1997 American disaster thriller film directed by Roger Donaldson. Starring Pierce Brosnan, Linda Hamilton, Charles Hallahan, Elizabeth Hoffman, Jamie Renée Smith, Jeremy Foley, and Grant Heslov, the film is set in the fictional town of Dante's Peak where the inhabitants fight to survive a volcanic eruption from a long dormant stratovolcano that has suddenly woken up. The film was released on February 7, 1997, under the production of Universal Pictures and Pacific Western Productions. Despite mostly negative reviews, it was a box office success and has since gained a cult following among disaster film aficionados.

In 1993, USGS volcanologist Dr. Harry Dalton and his partner, Marianne, attempt to escape Galeras's eruption in Colombia. In the escape a piece of debris kills Marianne.