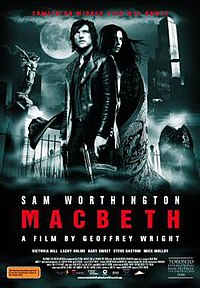 Macbeth is a 2006 Australian adaptation of William Shakespeare's Macbeth. It was directed by Geoffrey Wright and features an ensemble cast led by Sam Worthington in the title role. Macbeth, filmed in Melbourne and Victoria, was released in Australia on 21 September 2006.

In a cemetery the Weird Sisters, three school girl witches, are destroying and defacing headstones and statues, while close by Lady Macbeth weeps beside a headstone marked "beloved son" and Macbeth stands by. The three witches plan to meet with Macbeth later, and leave the cemetery.