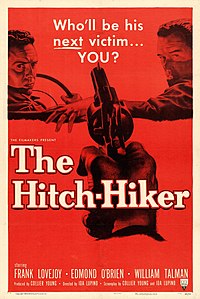 The Hitch-Hiker is a 1953 American film noir thriller co-written and directed by Ida Lupino, starring Edmond O'Brien, William Talman and Frank Lovejoy, about two friends taken hostage by a hitchhiker during an automobile trip to Mexico.

As the film begins, a man is shown hitchhiking and being picked up by a succession of people whom he subsequently robs and kills. A suspect, Emmett Myers (Talman), is publicized in newspaper headlines.