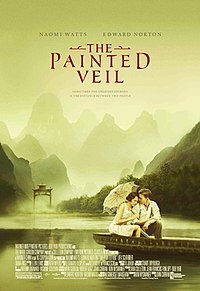 The Painted Veil is a 2006 American drama film directed by John Curran. The screenplay by Ron Nyswaner is based on the 1925 novel of the same title by W. Somerset Maugham. Edward Norton, Naomi Watts, Toby Jones, Anthony Wong Chau Sang and Liev Schreiber appear in the leading roles.

The early 1920s. On a brief trip back to London, earnest, bookish bacteriologist Walter Fane (Edward Norton) is dazzled by Kitty Garstin (Naomi Watts), a vain London socialite. He proposes; she accepts ("only to get as far away from [her] mother as possible"), and the couple honeymoon in Venice. They travel on to Walter's medical post in Shanghai, where he is stationed in a government lab studying infectious diseases. They find themselves ill-suited, with Kitty much more interested in parties and the social life of the British expatriates.