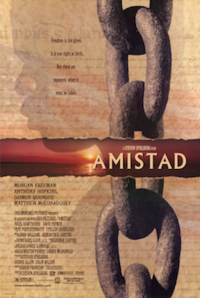 Amistad is a 1997 American historical drama film directed by Steven Spielberg, based on the true story of the events in 1839 aboard the slave ship La Amistad, during which Mende tribesmen abducted for the slave trade managed to gain control of their captors' ship off the coast of Cuba, and the international legal battle that followed their capture by the Washington, a U.S. revenue cutter. The case was ultimately resolved by the U.S. Supreme Court in 1841.

La Amistad is a slave ship transporting captured Africans from Spanish Cuba to the United States in 1839. Joseph Cinqué, a leader of the Africans, leads a mutiny and takes over the ship. The mutineers spare the lives of two Spanish navigators to help them sail the ship back to Africa. Instead, the navigators misdirect the Africans and sail directly north to the east coast of the United States, where the ship is stopped by the American Navy, and the surviving Africans imprisoned as runaway slaves.