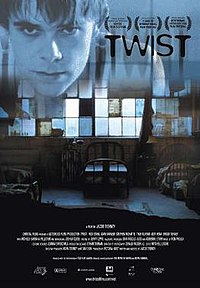 Twist is a 2003 Canadian drama film directed by Jacob Tierney and starring Nick Stahl and Joshua Close. It is a retelling of Charles Dickens' classic 1838 novel Oliver Twist.

The plot of Oliver Twist is updated to the present day, and moved out of the London poor house onto the streets of a large North American city (in Donsky's film it was New York City, and this film it is Toronto). In addition, the tale is told not from Oliver's point of view, but rather that of Dodge (Nick Stahl). Oliver (Joshua Close) falls into the hands of down-and-out young men. Dodge takes Oliver under his wing and instructs him in the unforgiving arts of drug abuse and prostitution. Oliver develops a crush on Dodge and views him as his boyfriend, complicating their friendship. Dodge does not reciprocate his feelings, and reacts angrily to Oliver's kisses and other signs of affection. As Oliver's innocence dissolves, both young men confront their demons, and ultimately it is Dodge who finds he cannot escape his past. Dodge is found by his brother around the same time the young men's caretaker commits suicide, sending Dodge into a violent rage at the film's conclusion.