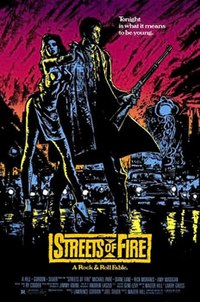 Streets of Fire is a 1984 American neo-noir rock musical film directed by Walter Hill and co-written by Hill and Larry Gross. The film is described in its opening credits and posters as "A Rock & Roll Fable" and is a mix of various movie genres with elements of retro-1950s woven into then-current 1980s themes.

In Richmond, a city district in a time period that resembles the 1950s (referred to within the film as 'another time, another place'), Ellen Aim (Diane Lane), lead singer of Ellen Aim and the Attackers, has returned home to give a concert. The Bombers, a biker gang of another part of town named the Battery, led by Raven Shaddock (Willem Dafoe), crash the concert and kidnap Ellen.