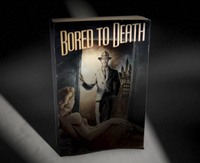 Bored to Death is an American comedy series that ran on HBO from September 20, 2009 to November 28, 2011. The show was created by author Jonathan Ames, and stars Jason Schwartzman as a fictional Jonathan Ames—a writer based in Brooklyn, New York City, who moonlights as an unlicensed private detective. The show also stars Ted Danson as George and Zach Galifianakis as Ray, both friends of Jonathan. On December 20, 2011, HBO cancelled Bored to Death after three seasons and twenty-four episodes. Development of a television movie subsequently began in January 2013.