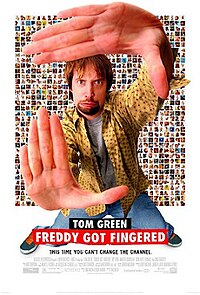 Freddy Got Fingered is a 2001 American surreal black comedy film directed by Tom Green and written by Green and Derek Harvie. The film follows Green as a 28-year-old slacker who wishes to become a professional cartoonist. The film's plot resembles Green's struggles as a young man trying to get his TV series picked up, which would later become the popular MTV show The Tom Green Show.

Unemployed 28-year-old cartoonist Gordon "Gord" Brody leaves his parents' home in Portland, Oregon, to pursue his lifelong ambition of obtaining a contract for an animated television series. His parents, Jim and Julie, give him a car in which he drives to Los Angeles and starts work at a cheese sandwich factory. Gord shows his drawings to Dave Davidson, the CEO of a major animation studio; Davidson commends the artwork but calls the concepts depicted, including a vigilante "X-Ray Cat", nonsensical. Disheartened, Gord quits his job and returns to his parents.