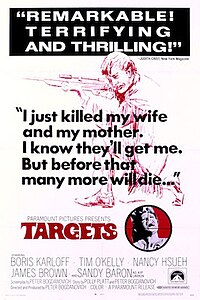 Targets is a 1968 American crime thriller film directed, co-written and co-produced by Peter Bogdanovich, with cinematography by László Kovács.

Byron Orlok, an aged, embittered horror movie actor, abruptly announces his decision to retire and return to his native England to live out his final days. Orlok considers himself outdated because he believes that people are no longer frightened by old-fashioned horror, citing real-life news stories as more horrifying than anything in his films. However, after much persuasion, particularly from young director Sammy Michaels, Orlok agrees to make a final in-person promotional appearance at a Reseda drive-in theater before leaving Hollywood for good.