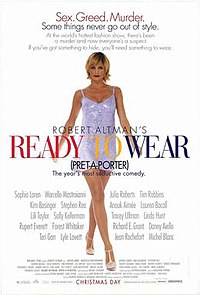 Prêt-à-Porter, released in the US as Ready to Wear (Prêt-à-Porter), is a 1994 American satirical comedy-drama film co-written, directed, and produced by Robert Altman and shot on location during the Paris Fashion Week with a host of international stars, models, and designers.

As models, designers and journalists gather for Paris Fashion Week, Fashion Council head Olivier de la Fontaine chokes to death on a sandwich, leaving behind a wife, a mistress, and a mysterious Russian companion who has fled the scene. As the death is being investigated, three rival magazine editors vie for the exclusive services of a trendy photographer while two journalists begin a hotel room tryst.