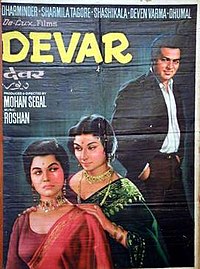 Devar is a 1966 Hindi film directed by Mohan Sehgal. It stars Dharmendra, Sharmila Tagore, Deven Verma and Shashikala. The music is by Roshan and the lyrics by Anand Bakshi. The film is based on the short novel Naa by the noted Bengali writer Tara Shankar Bandopadhyay. This novel was already adapted into 1954 Bengali movie of same name and the 1962 Tamil movie Padithaal Mattum Podhuma. This movie is Mohan Sehgal master piece and praised for Dharmendra & Sharmila cool performances with Deven Verma commendable negative role. All songs of Devar were big hit that time and still very popular especially "Baharon ne mera chaman lootkar "- Mukesh, "Duniya mein aisa kahan" - Lata and " Aaya hai mujhe phir yaad"- Mukesh

Shankar (Dharmendra) and Bhawariya (Sharmila Tagore) are childhood lovers who have been parted by unfortunate circumstances. Shankar's cousin Suresh is an advocate. Matchmaker Ram comes up with marriage proposals for both the cousins. Following family traditions, it is decided that the boys will meet the respective brides by proxy. Suresh falls in love with Madhumati (Bhawariya). He cooks up a wicked plot. He writes two letters to each of the families due to which an innocent and somewhat less educated Shankar is badly treated by his parents. One day accidentally Shankar comes to know that Madhumati is Bhawariya, the girl whom he used to love. So also, Bhawariya's brother, a handwriting expert comes to know of Suresh's wicked plan. Bbhawariya's brother asks Suresh to accept his guilt before Ashok's parents presuming that it is Suresh sitting on chair, but it happens to be Ashok who listens this and comes to know of everything. In a rift between Shankar and Suresh, Suresh dies accidentally, for which Shankar is held the culprit. Madumati who is determined to see her husband's murderer hanged, changes her words and saves Shankar.