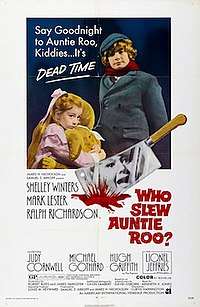 Whoever Slew Auntie Roo? (released in the U.S. as Who Slew Auntie Roo?) is a 1971 horror-thriller film directed by Curtis Harrington and starring Shelley Winters, Mark Lester, and Sir Ralph Richardson. Based partly on the fairy tale "Hansel and Gretel", the film focuses on a demented American widow living in her husband's English manor, who becomes obsessed with a young orphan girl who resembles her dead daughter.