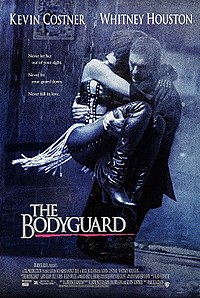 The Bodyguard is a 1992 American romantic thriller film directed by Mick Jackson, written by Lawrence Kasdan, and starring Kevin Costner, Whitney Houston, Gary Kemp, Bill Cobbs, and Ralph Waite. It follows a former Secret Service agent turned bodyguard who is hired to protect a music superstar from an unknown stalker. Kasdan wrote the film in the mid-1970s, originally as a vehicle for Steve McQueen and Diana Ross. The film marked Houston's acting debut.

Rachel Marron is an Academy Award-nominated actress and music superstar who is being sent death threats by a stalker. After a bomb explodes in her dressing room, her manager Bill Devaney seeks out professional bodyguard Frank Farmer, a former Secret Service agent who served during the Carter and Reagan presidencies, to protect her. Frank reluctantly accepts Devaney's offer, though he feels Rachel is a spoiled diva who is oblivious to the threats against her life.