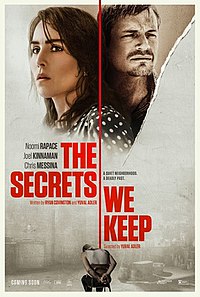 The Secrets We Keep is an 2020 American drama thriller film directed by Yuval Adler, from a screenplay by Adler and Ryan Covington. It stars Noomi Rapace, Joel Kinnaman, and Chris Messina.

Maja is a transplanted Romanian who, in the years since World War II has built a new life with her American husband, Lewis. She keeps her darkest memories to herself. Those memories threaten to upend that life when, on the serene streets of her small town, she recognizes a former German soldier and sets in motion a series of drastic events to confront the trauma, which she believes he inflicted on her.