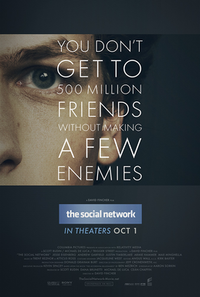 The Social Network is a 2010 American biographical drama film directed by David Fincher and written by Aaron Sorkin. Adapted from Ben Mezrich's 2009 book The Accidental Billionaires, it portrays the founding of social networking website Facebook and the resulting lawsuits. It stars Jesse Eisenberg as founder Mark Zuckerberg, along with Andrew Garfield as Eduardo Saverin, Justin Timberlake as Sean Parker, Armie Hammer as Cameron and Tyler Winklevoss, and Max Minghella as Divya Narendra. Neither Zuckerberg nor any other Facebook staff were involved with the project, although Saverin was a consultant for Mezrich's book. The film was released in the United States by Columbia Pictures on October 1, 2010.

In October 2003, 19-year-old Harvard University student Mark Zuckerberg is dumped by his girlfriend Erica Albright. Returning to his dorm, Zuckerberg writes an insulting entry about Albright on his LiveJournal blog. He creates a campus website called Facemash by hacking into college databases to steal photos of female students, then allowing site visitors to rate their attractiveness. After traffic to the site crashes parts of Harvard's computer network, Zuckerberg is given six months of academic probation. However, Facemash's popularity attracts the attention of twins Cameron and Tyler Winklevoss and their business partner Divya Narendra. The trio invites Zuckerberg to work on Harvard Connection, a social network exclusive to Harvard students and aimed at dating.