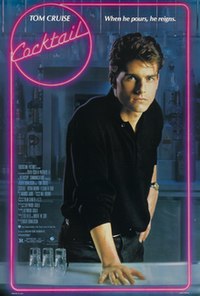 Cocktail is a 1988 American romantic comedy-drama film directed by Roger Donaldson from a screenplay by Heywood Gould, based on Gould's book of the same name. The film tells the story of a young New York City business student, Brian Flanagan, who takes up bartending in order to make ends meet. The film stars Tom Cruise, Bryan Brown, and Elisabeth Shue.

Cocky Brian Flanagan, just finished with his stint in the army, heads back to NYC and is eager to land a high-powered job in the business world. When he fails, he settles for work as a bartender while attending business school during the day.