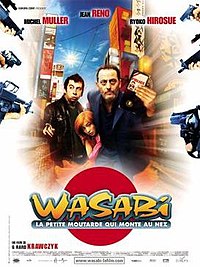 Wasabi is a 2001 French action-comedy film directed by Gérard Krawczyk and written and produced by Luc Besson. The film stars Jean Reno, Michel Muller and Ryōko Hirosue. In France, it was released as Wasabi, la petite moutarde qui monte au nez ("Wasabi, the little mustard that gets right up your nose").

A woman (later revealed to be a transvestite), dancing provocatively to the enjoyment of other nightclub patrons, is abruptly hit in the face by Hubert Florentini (Reno), a commisaire of the French Police. Florentini drags her out of the club in handcuffs, assaulting other patrons who come too close to free the captive woman or attempt to hinder his exit. Unfortunately, one of these patrons includes the chief's son.