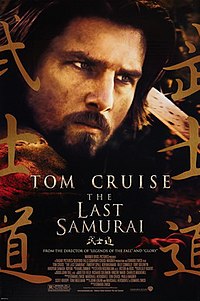 The Last Samurai is a 2003 epic period action drama film directed and co-produced by Edward Zwick, who also co-wrote the screenplay with John Logan and Marshall Herskovitz from a story devised by Logan. The film stars Ken Watanabe in the title role, with Tom Cruise, who also co-produced, as a soldier-turned-samurai who befriends him, and Timothy Spall, Billy Connolly, Tony Goldwyn, Hiroyuki Sanada, Koyuki, and Shin Koyamada in supporting roles.

In 1876, former U.S. Army Captain Nathan Algren, a bitter alcoholic traumatized by the atrocities he committed during the American Indian Wars, is approached by his former commanding officer Colonel Bagley to train the newly created Imperial Japanese Army for a forward-thinking Japanese businessman, Omura, who intends to use the army to suppress a Samurai-headed rebellion against Japan's new emperor. Despite his hatred of Bagley for his role in the Indian Wars, an impoverished Algren takes the job for the money, and is accompanied to Japan by his old friend, Sergeant Zebulon Gant. Upon arriving, Algren meets Simon Graham, a British translator knowledgeable about the samurai.