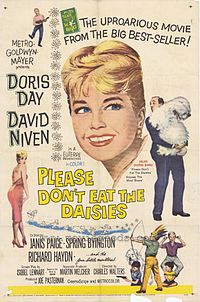 Please Don't Eat the Daisies is a 1960 Metrocolor comedy film in CinemaScope starring Doris Day and David Niven, made by Euterpe Inc., and distributed by Metro-Goldwyn-Mayer. The movie was directed by Charles Walters and produced by Joe Pasternak, with Martin Melcher (Day's husband) as associate producer.

Professor Lawrence Mackay (Niven) and his wife Kate (Day) are struggling with four young sons in a tiny two-bedroom apartment in New York City. Months before, they had announced their intention to move to a larger apartment, but have not been able to find one. Meanwhile, their lease has expired and the landlord has rented out their apartment to someone who insists they vacate immediately. They decide to look for a house in the country, but the only thing they can afford is a run-down mansion complete with secret panels and trap doors, 70 miles away by train in fictional Hooton. They have no choice but to move in and start fixing it up.