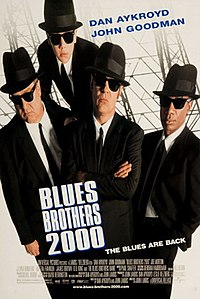 Blues Brothers 2000 is a 1998 American musical comedy film that is a sequel to the 1980 film The Blues Brothers, written and produced by John Landis and Dan Aykroyd. Directed by Landis, the film stars Aykroyd and John Goodman, with cameo appearances by various musicians. The film is dedicated to John Belushi, Cab Calloway, and John Candy, cast members from the original film who had died prior to the sequel's production, as well as Junior Wells, who died one month before it was released.

Elwood Blues is released from prison after serving eighteen years for the events of the previous film and is informed that his brother, "Joliet" Jake Blues, has died. He is picked up by Matara, a dancer who works for the Blues Brothers' former drummer Willie Hall, who now runs a night club. Willie gives Elwood a job to help him get back on his feet.