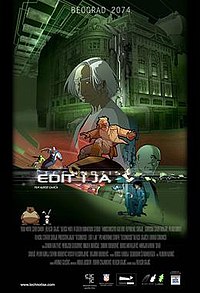 Technotise: Edit & I (, Edit i Ja) is a Serbian animated feature film, premiered on September 28, 2009. Written and directed by comic artist Aleksa Gajić, it is a sequel of his Technotise graphic novel. The soundtrack music was composed by Boris Furduj and Slobodan Štrumberger, as well as the film trailer.

The plot is set in 2074 in Belgrade. The main character is Edit M. Stefanović, a female psychology student who, after failing the same university exam for the sixth time, decides to visit a dealer on the black market who installs a stolen military chip in her body that will record everything she sees to help pass the exam. Edit also has a job at a scientific and social research company, in taking care of Abel Mustafov, an autistic math genius who discovered a formula that connects all forces in the world, but no computer was able to calculate it fully without becoming self aware and shutting down immediately after that. After Edit sees the formula graph, the chip calculates the formula, able to "survive" thanks to its connection to Edit, develops a parallel personality and affords her abilities greater than she ever imagined. Alas, this is quickly overshadowed by the discovery that the chip is rapidly taking over her mind and body. She must race against time to save her humanity while simultaneously thwarting the nefarious parties desperate to retrieve the technology inside her.