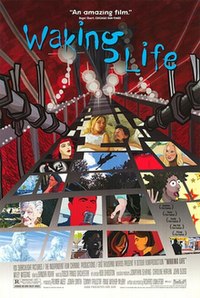 Waking Life is a 2001 American experimental adult animated film written and directed by Richard Linklater. The film explores a wide range of philosophical issues, including the nature of reality, dreams and lucid dreams, consciousness, the meaning of life, free will, and existentialism. It is centered on a young man who wanders through a succession of dream-like realities wherein he encounters a series of individuals who engage in insightful philosophical discussions.

An unnamed young man lives an ethereal existence that lacks transitions between everyday events and eventually progresses toward an existential crisis. He observes quietly but later participates actively in philosophical discussions involving other characters—ranging from quirky scholars and artists to everyday restaurant-goers and friends—about such issues as metaphysics, free will, social philosophy, and the meaning of life. Other scenes do not even include the protagonist's presence but rather focus on a random isolated person, a group of people, or a couple engaging in such topics from a disembodied perspective. Along the way, the film also touches upon existentialism, situationist politics, posthumanity, the film theory of André Bazin, and lucid dreaming, and makes references to various celebrated intellectual and literary figures by name.