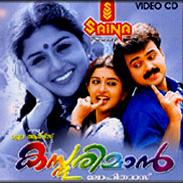 Kasthooriman is a 2003 Indian Malayalam-language romantic drama film written and directed by A. K. Lohithadas. The film shows the relationship developed between Sajan Joseph Alukka (Kunchako Boban) and Priyamvada (Meera Jasmine). The film was a blockbuster at the box office. Lohithadas remade this film in Tamil under the same title.

Sajan Joseph Alukka (Kunchako Boban) is a soft-spoken and studious young man, while his junior Priyamvada (Meera Jasmine) is smart and outgoing. Her close friend is in love with Sajan, but he avoids her by saying that his only ambition in life is to study hard and become an IAS.