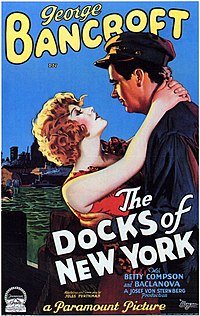 The Docks of New York is a 1928 American silent drama film directed by Josef von Sternberg and starring George Bancroft, Betty Compson, and Olga Baclanova. The movie was adapted by Jules Furthman from the John Monk Saunders story The Dock Walloper.

An American tramp steamer docks in New York harbor sometime in the early years of the 20th century before prohibition. In the bowels of the ship, coal stokers are shutting down the furnaces and anticipating a night of shore leave. The bullying third engineer, Andy (Mitchell Lewis) warns the exhausted crew that they will be punished if they return drunk when the vessel sails the following morning. The stokers gather to leer at crude pornographic graffiti scrawled on the engine room wall before debarking to carouse at the local gin-mills.