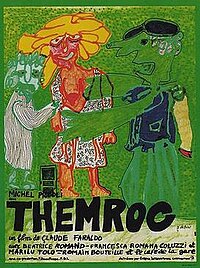 Themroc is a 1973 French satirical film by director Claude Faraldo. It was produced by François de Lannurien and Helène Vager and its original music was composed by Harald Maury. Made on a low budget with no intelligible dialog, Themroc tells the story of a French blue collar worker who rebels against modern society, reverting into an urban caveman. The film's scenes of incest and cannibalism earned it adults-only ratings. It was the first film to be shown in the UK's Channel 4's red triangle series of controversial films in 1986. It has become a cult film.