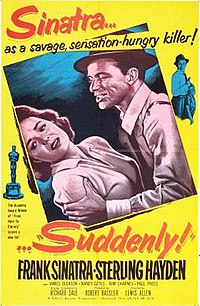 Suddenly is a 1954 American noir crime film directed by Lewis Allen with a screenplay written by Richard Sale. The drama stars Frank Sinatra and Sterling Hayden, and features James Gleason and Nancy Gates.

In post-war America, a train carrying the president of the United States is scheduled to make a stop in the small town of Suddenly, California. Claiming to be FBI agents checking up on security before the president’s arrival, three men arrive at the home of the Bensons: Ellen, a widow, her young son “Pidge,” and her father-in-law, “Pop” Benson. The house is on top of a hill that looks down on the station where the presidential train is scheduled to stop, making it a perfect perch from which to shoot the president when his train stops. However, it soon becomes clear that the men are not Government agents but assassins, led by the ruthless John Baron (Frank Sinatra), who take over the house and hold the family hostage, planning to shoot the president from a large window in the home.