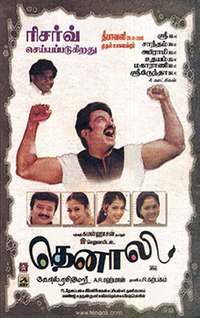 Thenali is a 2000 Indian Tamil-language comedy film produced and directed by K. S. Ravikumar and written by Crazy Mohan. The film stars Kamal Haasan in the title role, while Jayaram, Devayani and Jyothika did the supporting roles. The film's music was composed by A. R. Rahman. The film's cinematography and editing was handled by Priyan and K. Thanigachalam respectively.

Thenali Soman is a Sri Lankan Tamil refugee who has come to Chennai for psychiatric treatment. This is because of numerous phobias he has developed due to the Sri Lankan Civil War. Panchabhootham and his assistant, the doctors treating Thenali, are jealous of a relatively junior doctor Kailash getting all the media attention. They send Thenali over to him, believing his failure to cure Thenali of his phobias will derail his success. Soon after their first appointment, Kailash heads to his home in Kodaikanal on a vacation with his wife Jalaja and his two children Arjun and Aishwarya. Kailash tells Thenali to wait until after the vacation before his therapy can begin, but Panchabhootham asks for Thenali to go meet Kailash while on vacation.