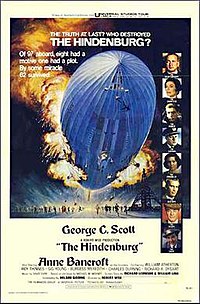 The Hindenburg is a 1975 American Technicolor disaster film based on the Hindenburg disaster. The film stars George C. Scott. It was produced and directed by Robert Wise, and was written by Nelson Gidding, Richard Levinson and William Link, based on the 1972 book of the same name by Michael M. Mooney.

Kathie Rauch from Milwaukee, Wisconsin sends a letter to the German Embassy in Washington, D.C., claiming the Hindenburg zeppelin will explode after flying over New York City. In the meantime, Luftwaffe Colonel Franz Ritter boards with the intention of protecting the Hindenburg as various threats have been made to down the airship, which some see as a symbol of Nazi Germany.