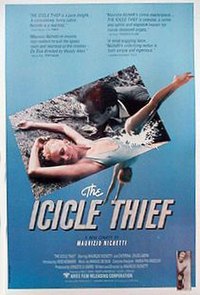 The Icicle Thief is a 1989 Italian comedy film directed by Maurizio Nichetti, titled in imitation of Vittorio De Sica's classic Italian neorealist film The Bicycle Thief (Italian: Ladri di biciclette). Some feel The Icicle Thief was created as a spoof of neorealism, which predominated Italian cinema after World War II. However, it is generally understood that the film is critical of the impact of consumerism on art, as suggested by the contrast between the nested film and commercials, and the apathy of Italian television viewers in recognising the difference between the two. The film won the Golden St. George at the 16th Moscow International Film Festival.

The movie begins with an egotistical film director, played by director Maurizo Nichetti himself, discussing his latest film on an intellectual Italian TV channel which is about to broadcast it at short notice in place of a more highly regarded competitor’s. His "masterpiece" follows the bleak travails of a poverty-stricken unemployed man (again played by Nichetti) who finds work in a chandelier factory, but cannot resist stealing one of the gleaming lights for his wife. The pompous director is initially pleased with the seriousness with which his work is analysed, but he then becomes distraught when his black-and-white opus is repeatedly interrupted by full-colour commercials. The TV audience, watching in their homes, are completely oblivious of the interruptions and the "outrages" perpetrated on the director’s artistic intentions.