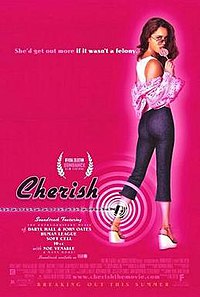 Cherish is a 2002 American comedy-drama film written and directed by Finn Taylor. It premiered at the Sundance Film Festival on January 14, 2002 and had a limited theatrical release June 7 of that same year. The Region 1 DVD was originally released June 1, 2004 and then re-released on October 25, 2005 with new cover art.